Back to basics with drugs as ‘kampo’ cures prove effective 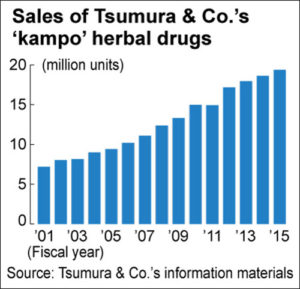 Back to basics with drugs as 'kampo' cures prove effective

The use of traditional “kampo” herbal medicines is spreading at health-care institutions.

Kampo refers to Japan’s traditional medicines that were imported from China many centuries ago.

They are aimed at improving people’s health by using simple medicines derived from plants, as well as other ingredients.

They have been scientifically recognized as having physiological effects, such as lessening the side effects of anticancer agents and also helping dementia patients more easily fall asleep.

Physicians and other health-care providers are accelerating their research to make full use of kampo medicines through the “fusion” of Western and oriental medicine.

On the evening of Aug. 3, an event to celebrate the establishment of a study group to discuss the future of kampo took place at a hotel in Tokyo.

The group was formed around the belief that the traditional medicines will greatly contribute to people’s health and medical services in the future.

As part of the group’s activities, leaders of many medical organizations will talk about the possible use of kampo for cancer patients and the elderly. It is scheduled to hold an open forum in February 2017 to publicly present its opinions.

“What is important is combining Western medicines with kampo in an appropriate manner,” Takaku said at a news conference. “Some kampo medications have been recognized worldwide. It is essential to accumulate scientific evidence through international studies.”

An ancient Chinese book that dates back about 1,800 years ago describes how to mix plants and other ingredients to make kampo drugs.

While kampo medications have long been said to have physiological effects, few physicians could use such agents or explain the mechanisms of the drugs in detail.

Kampo medicines have been given a boost as the mechanism of how they affect patients is scientifically uncovered.

According to the Japan Kampo Medicines Manufacturers Association, 148 kinds of kampo medications are currently covered by health insurance. How about 30 of those traditional agents work has been ascertained through scientific studies.

For example, a kampo medication known as daikenchuto has proven to be effective in aiding the intestines, while rikkunshito has been reported to alleviate symptoms of those suffering from a lack of appetite caused by anticancer agents.

A growing number of reports on the effects of kampo medications have been delivered at noted academic conferences in the United States.

This has promoted understanding of kampo drugs among physicians who primarily prescribe Western medicines that are typically made of chemical compounds.

Officials of the Shiba Daimon Imazu Clinic in Tokyo’s Minato Ward said about 500 patients visit the hospital each month from across Japan. Sixty percent of those patients have cancer, and two-thirds of them are advised to take kampo medications.

“They can alleviate symptoms that Western medicines cannot deal with, relieving their suffering,” said Yoshihiro Imazu, director of the clinic.

He said treatments provided at the hospital are covered by health insurance so patients do not need to fork out a huge amount of money.

Tsumura & Co., which sells 80 percent of all medical-purpose kampo medications available in Japan, says its sales have tripled over the last 15 years.

It is difficult to always ensure a stable supply of plants used as kampo ingredients, according to the firm, so it has recently been working to use larger amounts of plants grown in Japan to make the drugs.